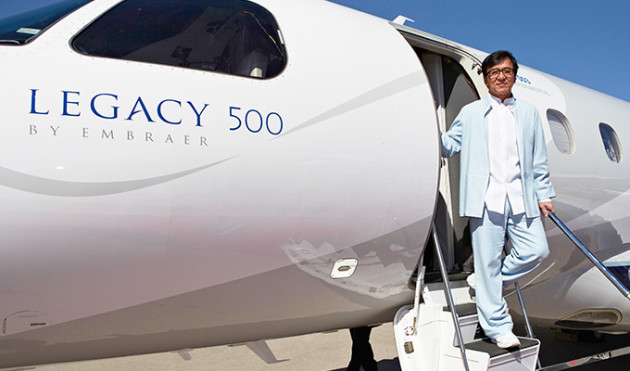 Embraer announced today that Jackie Chan, a world-renowned movie star, has become the first customer in China to take delivery of a Legacy 500.

“The Legacy 500 features our best-to-date technologies and it incorporates designs that maximize passenger comfort and fuel efficiency,” said Marco Tulio Pellegrini, President & CEO, Embraer Executive Jets. “This new aircraft, along with the Legacy 650 that we already delivered to Mr. Chan, will further facilitate his business development, as well as his humanitarian activities.”

Guan Dongyuan, Senior Vice President of Embraer and President of Embraer China, said: “We feel privileged to deliver the Legacy 500 to Jackie Chan, who is not only a world-renowned star, business elite and philanthropist, but also Embraer’s old partner, loyal customer and brand ambassador. I believe Jackie Chan’s choice reflects the changing mindset among Chinese customers that midsize executive jets can fulfill most of their business missions with higher efficiency and greater flexibility.”

“I’m so thrilled to receive this Legacy 500, a state-of-art executive jet,” said Jackie Chan. “In the past few years, my Legacy 650 has brought me fantastic traveling experiences and great convenience, allowing me to do more acting and philanthropic works around the world. I’m sure that the performance of the new Legacy 500 will again exceed my expectations, and become a comfortable mobile home and office for me.”

The Legacy 500 was granted Validation of Type Certificate from the Civil Aviation Administration of China (CAAC) in July 2015.

The Legacy 500 has the best-in-class 6-foot flat-floor cabin, which is comparable to those of some aircraft in the super-midsize category. Eight club seats may be berthed into four beds for complete rest in a cabin altitude of 6,000 feet. The in-flight entertainment system consists of a high-definition video system, surround sound, multiple audio and video input options, a cabin management system, and three options for voice communications and connectivity.

The Legacy 500 is capable of flying at 45,000 feet and is powered by two Honeywell HTF7500E engines, the greenest in their class. Taking off from airfields as short as 4,084 feet, the Legacy 500 has a range of 3,125 nautical miles (5,788 kilometers) with four passengers, including NBAA IFR fuel reserves, which enables it to fly nonstop from São Paulo to Caracas, Los Angeles to Honolulu, Teterboro to London, Moscow to New Delhi, Jakarta to Sydney, Dubai to Zurich, and Beijing to New Delhi.

Embraer is one of the world’s leading executive jet manufacturers, having entered the business aviation market in 2000 with the Legacy jet, which led to the launch of Embraer Executive Jets in 2005. Its portfolio, the broadest in the market, consists of the entry-level Phenom 100E and the Phenom 300 light jet, the Legacy 500 midsize and Legacy 450 mid-light, the super-midsize Legacy 600 and large Legacy 650, and the ultra-large Lineage 1000E. The Embraer Executive Jets global fleet exceeds 930 aircraft, which are in operation in more than 60 countries and are supported by the Company’s global Customer Support and Services network of around 75 owned and authorized service centers, complemented by a 24/7 Contact Center, at its headquarters in Brazil. For more information, please visit www.EmbraerExecutiveJets.com

SkyBahamas Flight Loses An Engine But Nails The Landing