Boondoggle or not, it appears the F-35 Lightning II is here to stay. Fortunately its one of only two fighter jets that can take-off and land vertically, and the only which while fully loaded can depart from a ship without a catapult. Here’s how it works.

If you’re not completely familiar with the development of this next generation fighter jet, here’s a quick primer. There are three versions of the this aircraft, the Air Force will get the F-35A which is intended to replace the F-16 and lands on normal runways with no vertical flight capability. The F-35B which will replaces the AV-8B Harrier and can perform Short Take Off and Vertical Landing (STOVL) from Amphibious ships like the USS Wasp (LHD-1) which began testing last year as the platform for the F-35B’s first real-world operational test (OT-1). Lastly, the F-35C has beefed up landing gear that will eventually fulfill the role of the F-18 and can take-off with catapults and land with arresting wires on aircraft carriers for the Navy. Like the A model the F-35C also cannot operate vertically.

Both the Harrier and F-35B can only carry a fraction of their total payload in a hover but the F-35B has the advantage to perform a short takeoff while fully loaded. The short deck of amphibious ships that were designed for the STOVL capabilities of the Harrier and later the V-22 Osprey, don’t provide a long enough runway for the wings to generate enough aerodynamic lift to support the weight of the aircraft. A small amount of forward airspeed combined with a massive amount of downward thrust allows the F-35B to lift the entire weight of the aircraft plus fuel and ordnance in a very short distance.

This is all made possible by the nearly 41,000 lbs of vertical thrust that the Lightning II can produce during a hover. This thrust is created by both a horizontally mounted LiftFan that sits directly behind the pilot. During hover mode, a door will open above the fan and the dual counter rotating fans blast 20,000 lbs of unheated thrust straight down. The majority of the remaining downward thrust is provided by a 90 swivel nozzle at the rear of the aircraft that vectors an additional 18,000 lbs of thrust from the turbine engine exhaust. Supplemental thrust of up to 2,000 lbs each are supplied by a port on each wing to aid in roll stability.

When STVOL mode is engaged, the LiftFan is powered by very clever shaft connected via a carbon clutch to the turbine engine. Once the LiftFan reaches engine speed, a mechanical connection is engaged to relieve the torque load from the clutch plates. The transition to SVTOL takes only about 15 seconds. 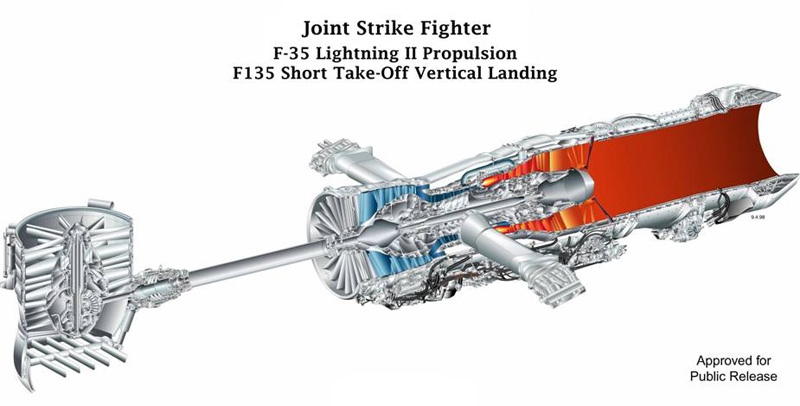 When empty, an F-35B weighs roughly 32,000 lbs, and can carry a little over 13,000 lbs worth of fuel. The F-35B is also meant to hover with a thrust to weight ratio of 1.1 that will allow for maneuvering, meaning it has to weigh 38,000 lbs in a hover. This limits fuel loads to only 5,000 lbs if a vertical takeoff is required. 5000 lbs of fuel should be enough to fly you 300+ nautical miles. If you can get aerial refueling soon after takeoff via a V-22 Osprey or other aerial refueling tanker courtesy of the U.S. Air Force, you range can be extended to the maximum. If the current mission demands extra fire power, more of that fuel can be traded for maybe an AMRAAM air-to-air missile or a JDAM that can weigh upwards of 2,000 lbs.

Additionally, the F-35B does not have a built-in gun. If it needs a gun it uses an external pod, looks like this. The gun pod with full ammo weighs less than 1000lb. What? No built in gun, you ask. A large part of the reason for why the gun is external and optional is so it can be left off if you need the weight for something else, e.g. more fuel or bigger bombs. Fortunately the U.S. Navy has figured out that military fighters can still be very effective without the use of guns, so an optional external gun give the F-35B even more flexibility to operate in many different roles.

If full fuel and lots of go-boom devices are required for whatever you are ordered to destroy, only a short amount of takeoff roll is needed to get airborne while fully laiden. The USS Wasp, which has been hosting the six United States Marine Corps F-35Bs for the latest round of operation tests is in total is about 2.5 football fields long or to be exact, 843 ft. The F-35B is designed to takeoff with a full payload in only 550 ft, with that distance getting shorter the less payload you put on it. That’s why you might notice in the video below that only a portion of the deck is required to take flight.

This means that very large floating cities with complicated catapult systems are not necessary to deploy aerial forces overseas. Instead, the flexibility of a the small flat deck amphibious assault ships, like the USS Wasp, can be leveraged to more quickly and easily sail to areas that might not be accessible to the massive aircraft carriers from which the time-tested F/A-18s operate. With the first operational test completed, the Marines are quite optimistic that this technology will shortly become reality.

Of course, there are other aircraft that can take off without a catapult, instead using a ramp known as STOBAR. Only a few types are designed to utilize this method like the Indian HAL Tejas, Russian MiG-29K and Su-33, and Chinese J-15 but they are fairly limited in capacity, and its generally a mediocre method for launching an aircraft this way since only a small fuel and weapons payload are possible in order to achieve the required thrust-to-weight ratio to reach launch speed.