These one-time use, engineless aircraft would be towed in pairs near to the front lines of battle carrying troops or supplies to bolster advancing forces. Released high above the opposing forces, pilot’s would practically crash land into enemy territory abandoning the lame craft as they joined the action.

Military gliders as a method of delivery to battle had an advantage of landing troops in a concentrated location as opposed to paratrooping jumpers who would be scattered over a large drop zone. The large cargo transport tow plane could also stay well clear of enemy anti-aircraft weapons. The small, silent glider was easier to maneuver undetected and penetrate enemy territory.

The most widely used glider for the Army Air Forces during World War II was the Waco CG-4A. Given the disposable nature of the intended mission, the aircraft was constructed with inexpensive materials. The majority of the vehicles were built at the Ford Motor Company’s Kingsford plant in Michigan and pieced together with a canvas fabric stretched over a simple wood frame. The CG-4A could carry up to 13 troops and their equipment or dedicated military cargo like a 1/4 ton Willys jeep. 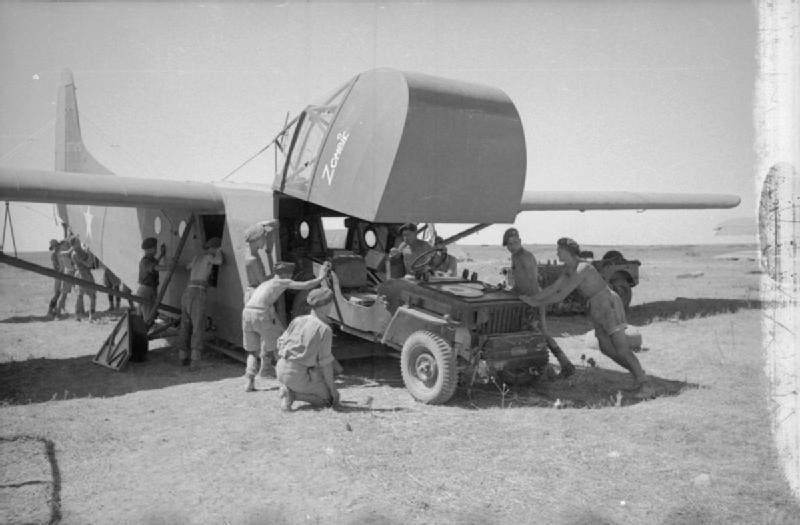 The Waco glider was first used in the Invasion of Sicily and also participated in the D-day assault on France. Other notable missions that relied on the glider were the Battle of the Bulge, Operation Market Garden, and Crossing the Rhine. By the end of the war, the U.S. had built 14,612 gliders and trained over 6,000 pilots. Gliders were deleted from the U.S. Army’s forces in 1953 but are still used today to train pilots on the fundamental’s of flight at the Unites States Air Force Academy.

Gliders were generally towed in pairs hundreds of miles, typically by a Douglas C-47 military transport aircraft. The C-47 is the military variant of the venerable DC-3 airliner that revolutionized the way airlines transported passengers across the United States and around the world. A typical launch would involve a normal takeoff on a standard runway, but a method to snatch a glider was developed to retrieve abandoned gliders in the field. The “snatch” method was intended to recover and repurpose empty gliders that landed undamaged in a combat zone.

Rare exceptions were made to add passengers during a snatch due the the high risk of damage to aircraft or persons from the incredible recoil force in the event of a towline break. One risky exception was approved to rescue injured soldiers trapped in German territory. 1st Lieutenant Gerald “Bud” Berry, lead C-47 pilot in a 2-ship flight, recalls the events of the mission from his base at Chateaudun in France to a forward airstrip in Reims then on to Remagen in Germany.

The flight was about one hour. Both combinations passed the Rhine River at some 600 feet altitude. The landing strip was prepared the same morning for the evacuation.

A towrope was attached to the nose of the glider, while the other end was laid over two red-white stakes of some 12 feet high. A yellow flag near the glider mentioned that the glider was ready for the pick-up. I flew in the direction of the strip, while Albert Furr unrolled the nylon cable with the wooden hook from the drum, inside the fuselage of the C 47.

Again I gave full throttle and the glider with the wounded was on its way to the hospital.

I remember that one or more severely wounded Germans were among the litter patients for the second glider. The glider was picked up by Lieutenant Clippard and we were escorted by P-51 Mustang fighter plane.

The formation flew back to France. The flight was about half an hour. The ride per ambulance would take some 4 to 5 hours. The gliders landed on a grassy strip, next to a big tent of the 44th Evacuation Hospital. During landing, the second glider lost a wheel and came to a halt in a fence. Ambulances stopped at the glider and took the patients to the tent.

We dropped our tow ropes and landed to retrieve the ropes, then we took off again and returned to our base in Chateaudun.

After the second world war, gliders lost their demand for troop insertion. By the time of the Korean war, helicopters had replaced the unpowered aircraft. With the rise in rotary wing technology, helicopters had the advantage to both extract troops from the battlefield in addition to delivering them. Also, advances in large transport aircraft were able to deliver jeeps and light tanks by parachute.

Watch A Fabulous Time-Lapse Of Boeing Building The Dreamliner

Behold This Never Before Seen Footage Of The B-2 Bomber