The thin/dry air of high altitudes, long exposure to direct sunlight, and jet lag can all wreak havoc on your body. Proper hydration is fundamental to keep you in the air. Here are the top 5 ways, in no particular order, to relieve yourself inflight after consuming enough liquid to sustain a small African village.

The following is by no means an exhaustive list of options to pee in a plane, but simply scenarios I have found to be most common during my 16 years as a pilot. It is based on flights conducted in aircraft that do not have a functioning/dedicated lavatory and where the pilot is unable to leave his or her seat. The list contains examples that should also be useful to female pilot’s as well, but due to obvious differences in gender anatomy, it is an order of magnitude more difficult for a woman to go in any object other than a toilet.

While these techniques may also be adapted to use in a car, keep in mind that an airplane will generally remain in level flight should you need to release the controls for a few moments to take care of business. Its a big sky and you’re not contained to a 20 foot wide patch of pavement. It only takes a split second for your car to drive itself off the road while you fumble with your fly. Be mindful of other drivers and consider these perfect options for your passengers.

Quite possibly the all-time go-to portable urinal for the private pilot, the Little John is cheap, light and can be adapted easily to accommodate female bits. Due to the round shape, has been known to roll around the floor making it difficult to locate especially when time is of the essence. Seals tight for no spills and has plenty of capacity for long trips. Also a bright emergency red color like the telephone the commissioner used to call Batman with, so you know it serious. 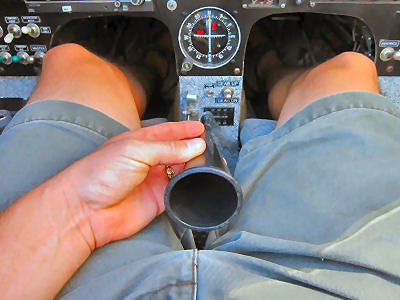 A long established method in the military, the relief tube is a beautifully simple device generally fitted with a funnel clipped to your seat with a rubber tube that drains liquids out the bottom of the fuselage.

Unfortunately these are rarely found on modern private aircraft and also have the downside of potential corrosion to the exterior of the plane and are susceptible to kinks, cracks and freezing. Also, don’t drink the yellow rain. 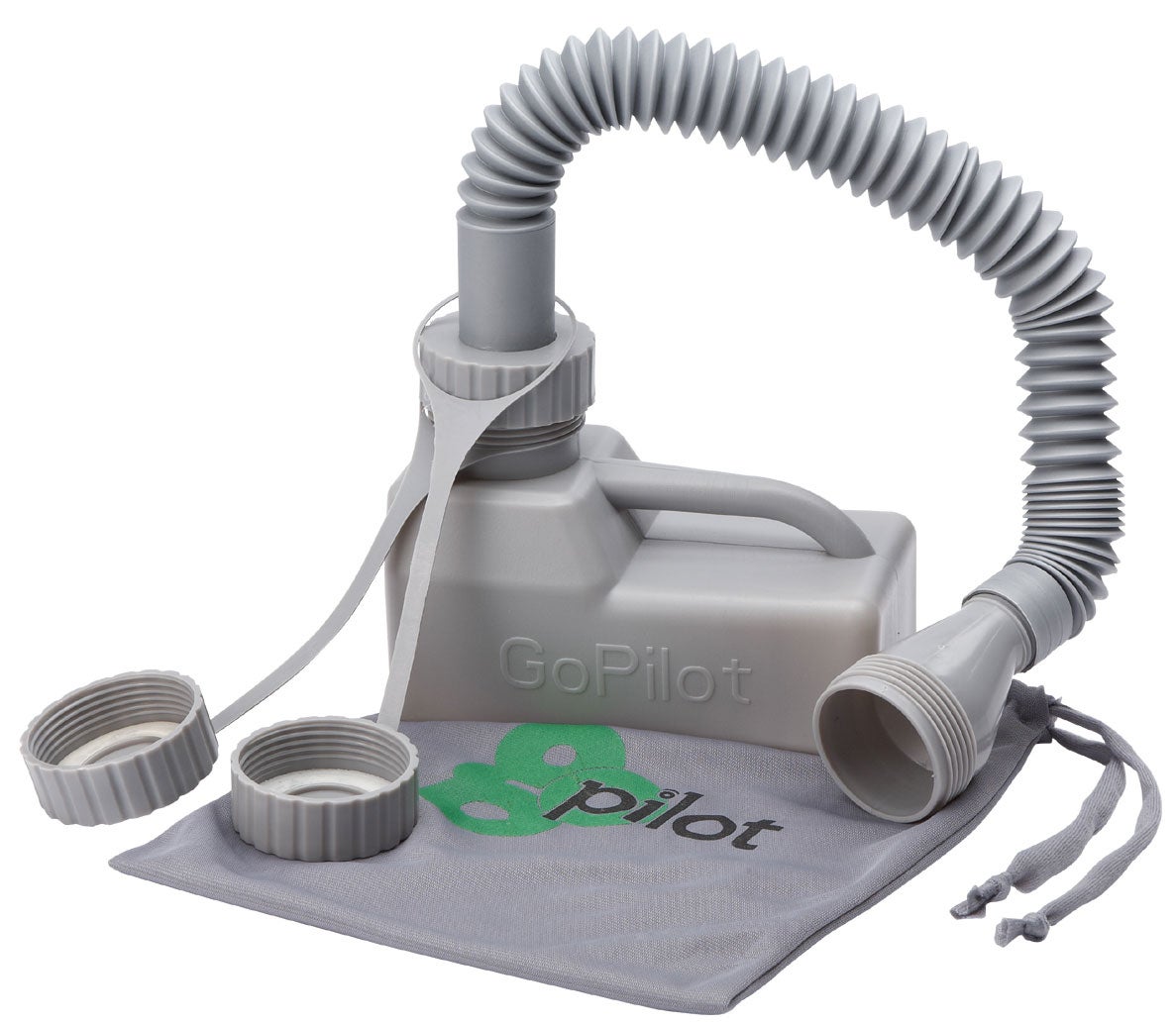 While a permanently mounted tube might be a simple modification, portable relief tubes make a great option that combine the convenience and large capacity of the previously mentioned Little John with the versatility of a flexible tube making relief an easier task while also keeping the wings level. 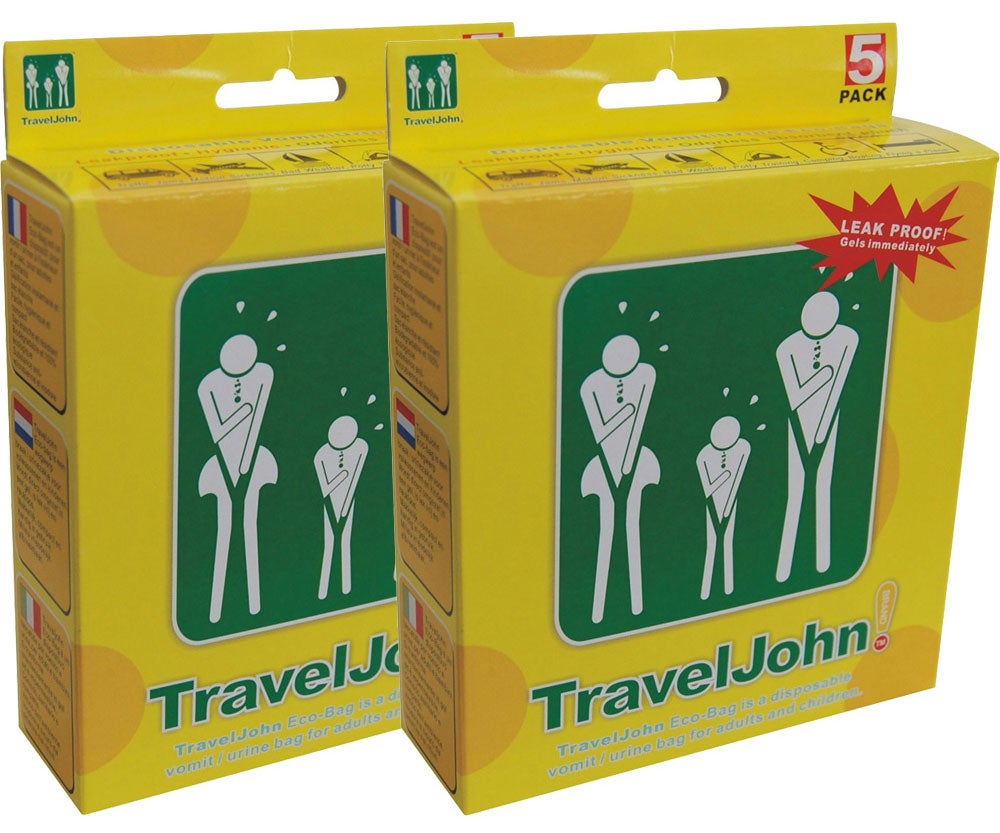 A relatively more high tech solution, the “piddle pack” uses a sponge or powered to absorb liquid. A chemical reaction between the material in the bag and your pee instantly gels into a solid. These can also double a barf bag and while they tend to be cheap and disposable, they do not seal well and are not as leak proof as the marketing suggests. Use at your own risk, but certainly a better option than the last that we’ll discuss later.

All the previous solutions for portable peeing require some sort of forethought and preplanning. This might not always be the case is you fly multiple aircraft, or you’re on call and subject to whatever aircraft you are assigned. Fortunately since you have been keeping yourself properly hydrated you’re most likely have some form of plastic disposable container complete with its own cap. A Gatorade bottle offers large capacity combined with a wide opening that make aiming while experiencing moderate turbulence a lifesaver. A water bottle or even an empty on-quart oil bottle may also be considered but keep in mind the opening will be much smaller but it will most likely be self lubricated. Since this option takes little foresight, adaptation for the girls is more difficult. On option might be to cut the top of a second bottle of water to use as a funnel if available.

Remember, just because you only drank a 12 oz. bottle of water doesn’t mean your morning cup of coffee is already waiting in line, so prepare for the quantity of exiting liquid to exceed the intake liquid. In this situation, its ok to consider the glass (bottle) half empty.

Consciously allowing your bladder to evacuate its contents might not actually fall under the last case scenario category. The pain and distraction of clenching your sphincter might interfere with your ability to keeps the airplane straight and level. If this is the case and none of the previous options are available, your best choice might be to pee your pants. Urine is fairly easy to clean from clothing, but be conscious of the aircraft interior. Sitting on your coat, a chart, or even your flight bag might be enough to protect that fake vinyl from your 1963 Cessna Skyhawk. While walking back to your car at the airport with a wet crotch might be a humbling experience, you’ll look no worse than I do after an average Saturday night out on the town. And if that doesn’t give you comfort, just remember the words of the wise and noble Billy Madison, “You’re not cool unless your pee your pants.”

Honorable mentions for unique pee techniques used by passengers are: