Oh, and not just one hi-revving 1300cc superbike motor, but two. Each powering its own propellor in slick counter-rotating fashion. This Bugatti 100p replica is about to take flight.

In case you didn’t know, Ettore Bugatti (the same Bugatti that made famous race cars) built a one-off airplane meant to compete in a popular aerial race at record setting speeds with intentions to turn military fighter. He persuaded the French Air Ministry to fund the project, but it was never completed due to a series unfortunate events. The plane was disassembled and hidden away during the start of the second World War to keep it away from the encroaching German regime.

Largely forgotten until the late 1960’s when the aircraft was found by an American Bugatti enthusiasts who imported it stateside. After a series of restorations, it was deemed to  be completed to original specifications. Unfortunately it was to never leave the ground and can be seen today in the EAA AirVenture Museum in Oshkosh, WI (which you should go check out because they have lots of other cool stuff too).

The 100p was considered not only beautiful, but in a period before the high performance aviation advancements were spawned by war, this flying Bugatti was perhaps the most high-tech airplane of its time. In the name of history, a group of (bonkers) enthusiasts have been hard at work attempting to build a flying replica of an airplane that never flew.

The new plane has held true to its original form as much as possible considering there are no known plans and only a handful of drawings to work from. While the original was built by Bugatti, the airframe was largely designed by prominent Belgian aeronautical engineer Louis de Monge. In order to more accurately reflect the original, Louis de Monge’s grand-nephew was recruited to work on building the replica for several months.

Only a few slight adjustments have been altered for safety and convenience like the custom built fixed pitch propellers and most significantly, twin 1300 cc Hayabusa motorcycle engines. Each mill powers one of the clever and patented counter-rotating propellers connected by an ingenious flexing driveshaft that wraps around the pilot. The combined horsepower reaches an impressive 420 which closely matches the original 450 horsepower spec from the twin Bugatti eight cylinder race car engines but with a considerable weight savings. 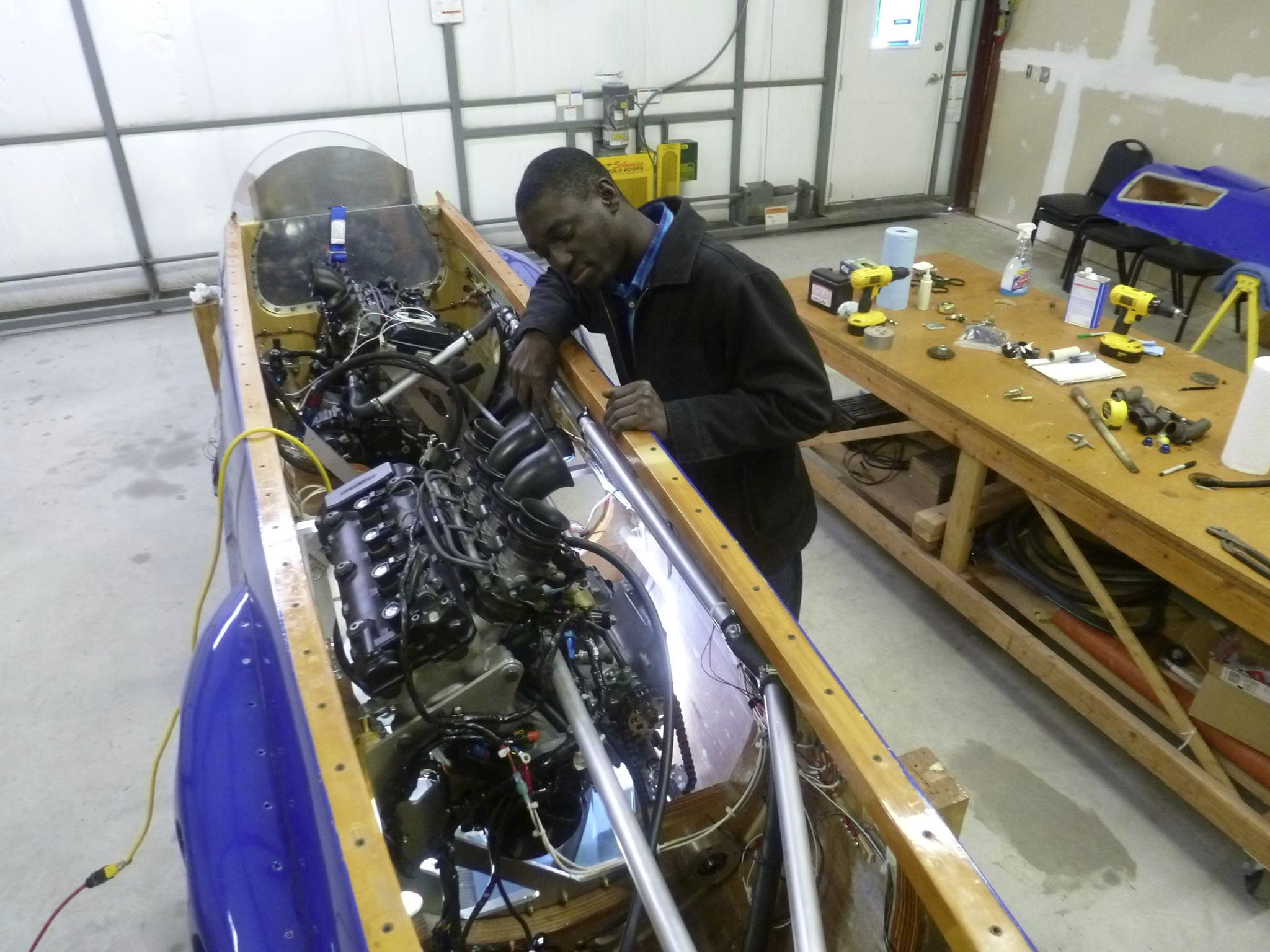 The original engines, designed by Jean Bugatti, were never started in the airframe and are now in the hands of a collector in London. They are considered to be priceless and though reproduction motors are available, they were cost prohibitive, thus the decision to use the venerable Hayabusa motorcycle engine to provide power.

After many months of custom fabrication and a tedious build process, the replica is running. First engine starts and high speed taxi test were performed earlier this week outside a hangar/workshop on a small airstrip in Tulsa, Oklahoma. With airworthiness certificate now in hand the team at The Bugatti 100p Project plans to make the first test flight any day now at an undisclosed location. The aircraft will presumably be trailered to a larger airport with a longer runway and an active fire/rescue squad. After a series of test flights proving it can be flown repeatedly and safely, demonstrations will be opened for public viewing.

If you’re in the Tulsa area, keep an eye to the skies for a little blue rocket with wings, because this is a big moment in aviation history.  You’ll be proud to tell your grandkids that you were one of the first to see the Bugatti airplane fly. If you’re not in Oklahoma, you can follow their progress with the rest of us by monitoring the project’s Facebook page.